Once I realized that I had no say in the matter, I resigned myself to the fact that I had to go to the hospital and have my problem taken care of. I called Humana my supplemental insurance company at home, and informed them, packed a small overnight bag, and went to the local Hillingdon Hospital.

The place was packed with patients, waiting to be seen by the triage nurses or the ER physicians. I waited in line for almost half hour before I could be seen by a triage nurse, despite the fact that I had a letter in my hand from the consultant that I had had a heart attack and that I should be seen by the ER physician immediately and admitted. After about half hour when my turn came, the nurse whose attitude was on the top of The Seeing Eye of London, had no time for me. She was asking me all sorts of questions as to why I was there, (as if I was faking my problem, just to be seen by her august majesty!), and what was the reason for admission etc. After explaining to her again and again about the setback I had with my health, she finally took the letter from the consultant; I was told to wait right there, and she disappeared into the bowels of that place. Returned after twenty minutes and asked that I follow her. We were taken into the ER part of the hospital. Never once did she ask me if I needed some assistance, like wheel chair or anything.

Once inside the ER and a cubicle, things started happening. A cannula was inserted in my vein and IV medication started to bust the platelet aggregation etc. Three hours later, I was transferred to an “Acute Medical Unit!” It consisted of a large hall with ten beds in it, separated by shower curtain like plastics. There was no question about privacy, HIPPA, or care for the patient. Each bed had about three or four visitors, sitting around talking loud, and the nurses were questioning the patients all personal details about their home lives, bowel habits, sugar problems etc. etc. Nobody spoke softly, even the nurses! Every one was loud and the cacophony was nerve wracking! This went on till about 12:30 in the night. Finally I called the nurse and asked for an eye cover so I could block the fluorescent lights in the room, and ear guards to block the noise of the visitors and the nurses. I asked them if there was no “quiet time for the patients to rest!” At that, the nurse stood in the middle of the room and yelled for all the visitors to leave, because some patients want to sleep!! I wanted to crawl into the ground!

In the morning was taken to the cardiac hospital around 11 by ambulance, where the situation was more professional. A couple of hours after admission there, I was taken to the cardiac cath lab, and an angiogram was done. I was told that I had a complete blockage of my right coronary artery, in the proximal part (Where the artery came out of the Aorta), and the catheter couldn’t be passed through the clot! I had such an out of body experience at that time. I really thought that I would be completely free of problem, and my blood vessels would be normal. I was not scared, not shocked, not stunned, just a “hmmm, is that so?” kind of feeling. Then I was told that because I had good collaterals, I did not need the stents put in, and that I was free to fly back home! I was ready to kiss the guy.

I am showing an angiogram picture of the blood vessel that is blocked in my heart as I write this. Hopefully, I will get a stent in the near future and have the blood supply restored as is seen in the second image here. I took these two images from google. 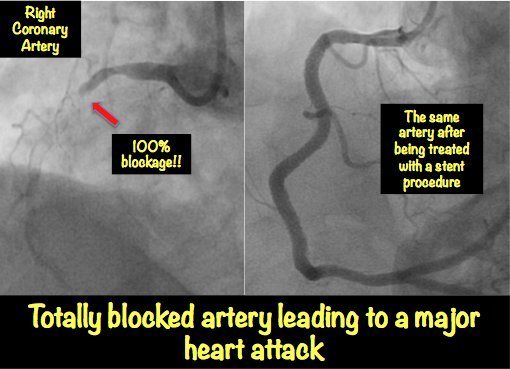 I am waiting to go to St. Louis next week to see a super specialist there who does stenting of difficult cases. Apparently, my blockage was happening over several months, and the last straw was on that Saturday when the lumen was completely closed. The clot was too hard to put the catheter tip through, and personally I think, that they didn’t want to, to avoid complications. This was just well and good by me, and I appreciated that. I didn’t want to stay there one day more than was necessary.

So now I have started cardiac rehab, and am feeling like a wet rag. Sleeping a lot. But, the best thing is there is no fear. Nothing; not at all! Very Zen about it all. Enjoying the solitude at home. M is away in New York having fun with his brother. Saadia and Sayeed check up on me two or three times a day, bring me food which I really do not need, there is so much in the fridge already, and I have my books to keep me company. Continuing my painting, and hoping to finish editing my book for publication this year yet!

So that’s it dear friends. To all of you, who have written personally, have sent such GORGEOUS flowers and for the loving wishes of care and compassion, I am deeply and humbly grateful.

THANK YOU. THANK  YOU AND AGAIN, THANK YOU.

Hope you know how much I love all of you.